► Know Before You go

►► Note: If you could make a group of 15 travellers, the sixteenth will be free.

We offer a 2 Day unique Camping trip from Fayoum and Wadi Al Hitan  ( whales valley) from Fayoum with Overnight Camping in the desert, Discover It’s ‘ Wadi Al Hitan  ’ The site today is a Protected area and a Natural Heritage Site added in 2005 by the UNESCO as a world heritage site.

At 06:00 Am pick up from your hotel in  Cairo to Fayoum by Private air-conditioned car to Fayoum, The distance is 150 k.m to Tunis village
From: Tunis village in Fayoum, Egypt. You will be Start your adventure by Toyota land cruiser 4x4  to   Wadi Al Hitan    ’

► Wadi Al Hitan    ’ is a Protected area and a Natural Heritage Site added in 2005 by UNESCO as a world heritage site, WADI EL-HITAN is also known for scientists in the Zeuglodon Valley, have been discovered in 1936, it is located 35 KM west of the Wadi El-Ryan, right deep into the desert western desert, is It is an area of fossils; considered as an open museum, dates back to 45 million years and contains petrified primitive whales skeletons, shark teeth, shells and roots of Mangroves preserved in soft rocks. Everywhere you go here you find petrified seashells and corals.
► Visit the  Fossil & Climate Change Museum
The museum hosts a variety of whale fossils, and skeletons that are displayed outdoors, as for the museum it has a variety of fossils, skeletons, fossilized mangroves, and ancient seashells exhibited indoors in glass boxes
At 12:00 Enjoy your lunch
►Drive to The Magic lake and Gebel Al-Mudawara
►The Magic lake:
One of the most beautiful lakes in Egypt, overlooking sand dunes, is the Magic lake. Around the lake gives you the chance to witness one of the most eye-catching sunsets you will ever see.

Magic Lake is a beautiful lake located in Wadi El Rayan in Fayoum. It was named the Magic lake as it changes its colors several times a day depending on the time of year and the amount of sunlight it receives.

It is an amazingly beautiful place surrounded by desert. People spend their time hiking & sand-boarding beside Magic Lake or even swimming in the lake itself.

The lake contains minerals that are said to help treat patients with rheumatism.
It’s simply a magical place for a magical trip.

Seven Kilometres south of the waterfall, Along the left eastern side of the road, Is a picturesque Area known as  Al Mudawara, The Lookout, There are three  Mountain along the lakeshore, it is  a favorite Picnic Area
► Wadi El Rayan
Wadi El Rayan is a depression 42 Meters below sea level and covers 673 K.m.In 1966 this depression became a water reservoir when it was connected with Qarun Lake by underground Pipe
Tea time by sunset- Bbq Dinner and overnight in the Camping 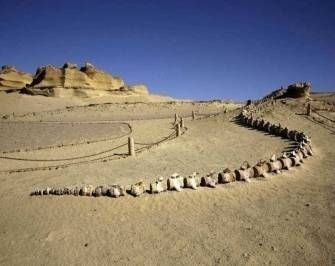 Enjoy Egyptian Breakfast, following with sand dunes Trip, and visit  Qusur El Arab. Wadi El Rayan. Then Proceed to Visit
► The Petrified forest
Situated in the north of Lake Qaroun in Gabal Qatrani is the largest petrified forest in the world, home to 40 meters high trees that have survived in ossified form for thousands of years
► Then Dimeh el Sabah
Dimeh al-Siba (Dime, Dima, and nearby Qasr al-Sangha) on the northern side of Lake Qaroun is one of the most interesting in the Fayoum,Dimeh al-Siba, Dimeh of the Lions, was a Ptolemaic city believed to be founded by Ptolemy II in the third century BC, on a site that shows evidence of habitation from the Neolithic period. Today, it is more isolated, but during Ptolemaic times it was at the shore of the much larger lake, situated at the edge of Moeris Bay and the beginning of the caravan routes into the Western Desert, The ruins of Dimeh al-Siba contain the two temples, houses, underground chambers, streets and ten-meter high walls that are sometimes up to five meters thick. The walls themselves are a testament to the survivability of mudbrick in the desert environment. The ground is strewn with debris. An uncountable number of shards cover the entire temple mound.
► Qaser Al Sagha
The Golden Fortress(Qaser Al Sagha) is an unusual  Middle kingdom, The building is situated North of the lake, The temple is constructed of limestone. The Function of this unusual temple is unclear.